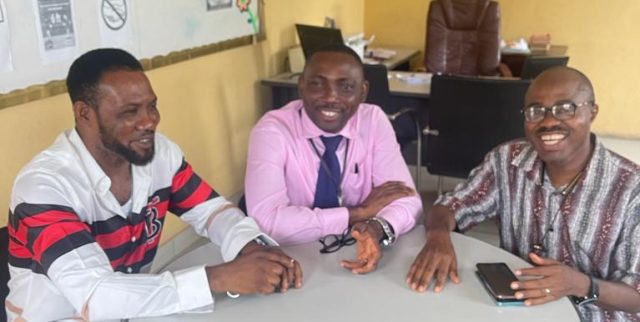 In  bid to catch them young and promoting grassroot soccer, WAM Football Academy has commenced consultation with  private schools in  Isolo communities of Lagos State .
The grassroot football academy has also stated that plans are afoot to engage public schools within the vicinity as part of measures to hunt and scout for talents between the ages of six  up to fifteen years.
Chairman of the Academy , Williams Ayodeji  disclosed this in a statement, made available to DAILY FOCUS NIGERIA on Thursday,  by Mr Samuel Onifade ,WAM Administrative Officer .
According to the statement, WAM executives paid a working visit to management of  Head Start Private School, Ire-Akari Estate Isolo , even as the Chairman reiterated the academy’s commitment towards providing an enabling environment to nurture young talents.
Speaking on the outcome of the meeting, Ayodeji stressed that:”We are here to engage owners of this private school , to let them know about our mission and vision for the youths and children of this great communities.
“We engage them on how to showcase their students in sports and we will continue to do so and also move to the public schools soon.
“Pupils between the ages of six to 10 and students between the ages of 10 and 15 are basically the ones we are interested in, so far they have the passion for football, they are rest assured to be part of our vision,”Ayodeji explained.
Continuing, Ayodeji maintained that”The purpose of the meeting was mainly on how to promote sports in Isolo and beyond . We want to believe that some of the private schools have what we want”.
On his part , the Director General Of The Academy Mr Joel Omomiyi Farinloye noted that HeadStart Private School, has a track record of grooming young ones in  academic pursuit even as he urged management of the school to sustain the tempo in promoting formal education for families within the communities.
Farinloye said that  Start Private School has been in existence for over three decades adding that notable personalities from various professions in the Nigeria economy had graduated from the school, which according to him,  include- engineers, lawyers, accountants, broadcasters, entertainers , politicians etc.
While responding, Principal of the school, Mr.
Onyesoh Chidunem, lauded efforts put in place by management of WAM Football Academy for bringing soccer  initiative to Isolo communities.
He also reassured management of the WAM Football Academy of the private  school’s partnership in  a bid to promote the talent hunt campaign
ALSO READ  English FA Approves Five Substitutes Ahead Of League Resumption
Loading...

I Has No Regrets About the Handball Incident at the 2010 World Cup —...

I Constructed Road To Your House, Wike Slams Amaechi