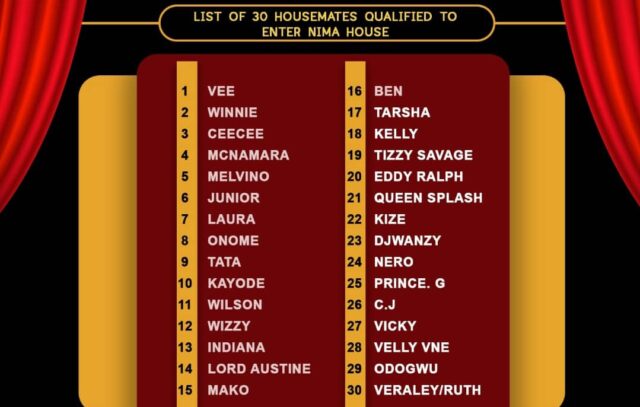 After 3 weeks Pre-qualification Voting Campaign, Miss Veronica Victor Ekpe, popularly known as VEE has emerged top of the voting table, even as 30 Housemates have been unveiled for the NIMA Reality TV Show.

Although VEE led the voting table only in Week 2 but failed to make top 10 in both week 1 and Week 3; yet her distant lead in Week 2 was good enough to earn her the top spot after the results of the 3 weeks were aggregated.

According to Platform Communications, promoters of NIMA, the Pre-qualification Voting Campaign was a Popularity Task designed to test the audience engagement skills and ability of the Contestants to build a large fan base before entering the NIMA Mansion for the Reality TV Show.

Meanwhile, at the end of the Pre-qualification Voting Campaign, 30 Contestants with the highest number of votes have automatically qualified and shortlisted as Housemates for the show. They are:  VEE, WINNIE, CEECEE, MCNAMARA, MELVINO, JUNIOR, LAURA, ONOME, TATA, KAYODE, WILSON, WIZZY,  INDIANA, LORD AUSTINE, MAKO and BEN.

Speaking shortly after the unveiling of the 30 Housemates in Lagos, the Project Director of NIMA, Mr Sylvanus Obasi revealed that the maritime industry reality TV show would hold for 30 days, between Sept 18 and October 17, 2022.

He also hinted that the project aims to raise creative youngesters who are passionate about innovating practical and creative solutions to maritime issues in Nigeria.

Mr Obasi, further assured that the Winner and Runners Up of the 10 million Naira NIMA Prize would work with relevant government agencies and maritime organisations to champion Cleaner Ocean Campaign and Eco-friendly maritime work environment as pet projects within their one year reign as Maritime Ambassadors.