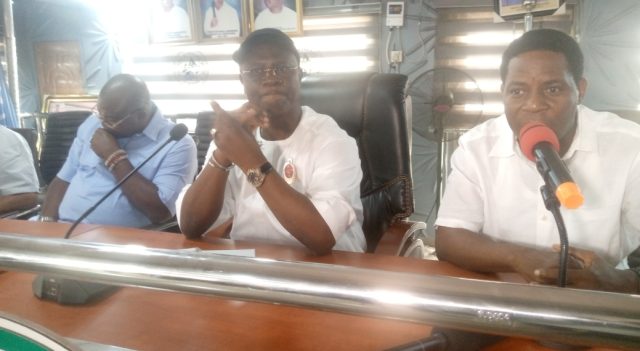 Seafarers and dockworkers have reaffirmed strong commitment towards ensuring  better welfare packages for members of the Maritime Workers Union of Nigeria (MWUN) in a bid to set agenda for the year 2023.

The groups under the aegis of Seamen and Water Transport/NIWA ; and Dockworkers Branches respectively, disclosed this on Wednesday in Lagos during a meeting with the President General, MWUN, Comrade Adewale Adeyanju as part of the year’s projection and prospects for members.

Top on the agenda for the year’s expectations  made known  by the two branches include: capacity building for members , effective National Joint Industrial Council (NJIC), coordination of the Memorandum of Understanding (MoU) with the Independent National Electoral Commission (INEC), retired benefit for aged seamen under the Nigerian National Shipping Lines (NNSL) and return of tally clerk and onboard security .

While speaking at the meeting, President, Dockworkers Branches, MWUN, Comrade Tajudeen Ohize Ibrahim expressed optimism for members and their welfare packages noting that “We have been able  to put in place a committee that will look into the NJIC as part of kick starting the year.”

He said that the new  year will also begin with sensitization of dockworkers at the port terminals over issues of drug importation which according to him was an issue in 2022 .

Comrade Ohize called on members of the branch to embrace  unity and harmony at the ports advising  that cooperation among district and unit officers at the terminals will help promote peaceful coexistence with relevant stakeholders of the maritime sector.

On his part President, Seamen and Water Transport NIWA Branch, Comrade Sunday Avoseh recalled the MOU agreement with INEC adding that union members who are boat operators within the littoral states will be actively involved in ensuring effective movement of  voting materials.

The President called on members to prioritize the interest of the union against personal agenda , which according to him, might work against the progress of the branch.

While highlighting the prospects for the year, the branch President reiterated consultation is ongoing to organise capacity building programme for  members in collaboration with the Nigerian Maritime Administration and Safety Agency (NIMASA) , pointing out that

Avoseh stressed the need for the unionisation of companies in Calabar , Cross River State , calling on the district executives to ensure that dues are collected from the organisations on behalf of the union  and must not be seen as Corporate Social Responsibility (CSR) or Public Relations PR.

He lauded efforts of the national executives of MWUN , led by Comrade Adeyanju for the timely intervention on behalf of the retired seafarers with the federal government of Nigeria,  noting that 2023 will bring positive news for the senior citizens.

He also commended the President General of MWUN for his leadership style and the roles played to ensure industrial peace in the shipping industry.

While reacting , Comrade Adeyanju reiterated that moves are ongoing for the return of tally clerks and onboard security at the nation’s seaports.

The PG  stated that a committee has been set up , comprising  the Nigerian Maritime Administration and Safety Agency (NIMASA), Nigerian Ports Authority (NPA), MWUN, among other relevant agencies.