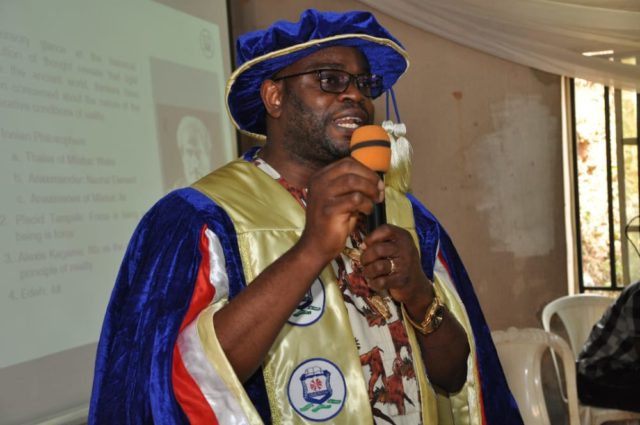 Professor Ikechukwu Anthony Kanu, OSA presented his Inaugural Lecture on 18th February, 2021, at Tansian University, Umunya–a University that was the brain child of the late but evergreen Monsignor  Prof. John Bosco Uchechukwu Akam. The Inaugural Lecture was the first of its kind in the history of the University. Professor Kanu is a man of many parts. Born in the early 80s, the Arondizuogu native was ordained a priest for the Augustinian Order in Nigeria, more than a decade ago. As a lover of academics and a gifted scholar, he quickly did his postgraduate studies at Nnamdi Azikiwe University, Awka and later bagged some professional degrees outside of Nigeria, as well. He is a specialist in African Philosophy, Religion and Cultural Studies. Today, he is a professor of Philosophy and Religion, after years of credible scholarship that was obvious to all. He is also the incumbent Prior Provincial of the Augustinian Order in Nigeria. He has worked across boards in many institutions of higher learning, namely, Tansian University, Umunya, Veritas University, Abuja, Vilanova Polytechnic, Ime-Ile, Osun State, where he was the Rector and Augustinian Institute of Philosophy.  He is a recipient of  many awards,  both in Nigeria and diaspora. Most prestigious of these awards so far, was the one conferred on him by Commonwealth University, UK (Honorary Doctorate Degree in Education). He is Founder and  President of the Association for the Promotion of African Studies (APAS); Editor-in-Chief of Igwebuike Journal of Arts and Humanities and the Journal of African Studies and Sustainable Development (JASSD)_ and other related Journals. Prof is a seasoned writer who has edited many book of Chapters that were published internationally both in print and E-books. He has also published some personal works including his book on African Philosophy, where he came like a new kid on the block, musing on the thoughts of past African Philosophers and introducing the _Igwebuike_ idea as his own novel contribution to the African philosophic tradition.

Igwebuike is at  the core of Kanu’s philosophy and ideology. Both in _theoria_ and _praxis_ .   It is the ‘kpim’ of his intellectual contribution to African philosophy.  The term _Igwebuike_ is multi-dimensional. It is a concept, it is a name, it is a word in both semantic and syntactic senses. It is an adage; it is both an ideology and a philosophy. As an ideology and philosophy, it has practical, cultural,  ethical and even political imports. As a concept, it represents the spirit of a people and the qualities they ought to admire. _Igwebuike_ is an Igbo term and it is literarily translated to mean : Igwe-People; bu-is; Ike-Power, strength. It may seem like the people is power. The people is strength. However, linguistically, it may bring no semantic appreciation especially to those who may want to really get to understand the concept. It reeks of ambiguity, when roughly or loosely translated like that.

To understand the Concept of _Igwebuike_ properly, it is better to bring a semantic decorum to the fore. Igwebuike is commonly understood as “strength in many.” It is more akin to the adage, that the more the merrier. It is more expressively meaningful when passed as : “Onye aghana Nwanne ya” ( do not leave your brethren behind).  When people team up to achieve a purpose, it becomes achievable because there is a collective will. There is that shared burden of interest and like the comic Onitsha based pastor, entertainer and internet sensation will say: “E kelu olu e ke,” meaning that labour or work is shared or there are different gifts and capacities for everyone. Now, when people come together with these different gifts and resources, to pull off a project that affects all, the result is that the society, community will be lifted out of backwardness, the Hobbesian state of nature, the wolfish anarchic society, into something progressive and “teleologic.” Igwebuike when further expatiated is further interchanged with concepts like communality, complementarity, togetherness, collectiveness, harmony and so on…

It follows that Prof. Kanu noted  that if there must be an ideology towards a socio-cultural foundation to African Philosophy, then, Igwebuike must be at the heart of African Philosophy and in fact, the underlying principle, thereby, further expanding the frontiers of African Metaphysics. Africans are ontologically “Igwebuikic.”  By this, I mean that the original African and not the one with a black skin but wears a white mask (even Fanon is angry in the grave till this day) is by his very being communal and ought to be complementaristic. By going against his own being, in copying others not in a positive sociological cultural diffusive sense but in a way that becomes unconscionable for identity, he ended up becoming the Wretched of the Earth.

Individualism is not an African thing. The _Cogito_ (self) is not made meaningful, unless in the _Cognatus_ . This is what Prof. Kanu seeks to accomplish with his contribution of Igwebuike.  He journeys like a lone voice in the wilderness of a continent   confronted with the crises of identity, neo-colonialism, underdevelopment, poverty, among others to remind us, that if we murder solipsism and pursue a collective sense of will, everyone as Africans will be lifted up. Igwebuike will lead to the rise of Africa. From the personal to the  collective. The personal will become because the collective is.

No man is an island. When people bring their resources together to achieve a common aim, the result is faster and better accomplished. Africans must be at the forefront of Africa’s development by having a collectivity of purpose as a race. This unified understanding eliminates individualism and unhealthy competition and rivalry. Igwebuike Philosophy can help Nigeria as a “poster-example” of division, tribalism, religious extremism and bigotry to heal.  Igwebuike is transformative. It exerts pressure in a way that it affects matter. It is indeed, thermodynamic! When we pass positive energy from one person to another across boards, why will there be conflict of interests? Why will there be division?  Why will there be war or a wall even built instead of a bridge? Why must Might instead of Unity be right? Why is Nigeria not United? Why is the Fulani Herdsmen creating a caliphate off a nation of more than 450 languages? Why is there lopsided appointments in government? Why is there poverty and unemployment in the land? Why is genuine love missing? Why is there mutual suspicion, petty jealousies and plenty rivalries across boards, even among academics who ought to be custodians of truth and knowledge? It is all because there is the privation of Igwebuike in our midst. Because as Africans, we have lost sense of our very identity and unique selling point (USP), which is to complement one another, to be in harmony, to be collective and communal, in all we do.

We must timelessly thank Professor Kanu for this beautiful contribution to African Philosophy. Not that the idea has not in one way or the other been emphasized by African Philosophers of the past, especially for instance, Nyerere’s Ujamaa, but Kanu like a modern prophet tapping from the wisdom of the ancient has brought about a reminder. The reminder that United, we can stand, divided we fall. The reminder that the destiny of a nation must have an ideological face. There are ways nations are peculiarly built and Igwebuike can become one of such tools for building Nigeria and Africa. Nigeria nay Africa can adopt the concept of Igwebuike as a national cum  continental driving force. It will awaken the giant in us to collectively pull our resources together to fight the common enemy of poverty and underdevelopment; the common enemy of tribalism and nepotism. The common enemy of corruption and the corollaries.

Igwebuike is indeed a strong case for African Philosophy. It is a contribution worthy of applause. If we understand its metaphysical fragrance. It follows that Prof. Kanu has etched his name in the pantheon of African philosophic intellectualism. It is not to be the end for him anyway, rather it should open a vista of more intellectual productivity and creativism. We can only applaud him now and then imbibe this philosophy in our quest to move our society, Nigeria and Africa forward.

Igwebuike: A Pathway to Africa’s 21st Century Integrated Development Strategy. Don’t you think so? For me, I do!

NPA: The Many ‘Sins’ Of Hadiza Bala Usman

Dr. Jamoh One Year In Office As DG NIMASA, A Case Of Chasing Shadows In The Dark