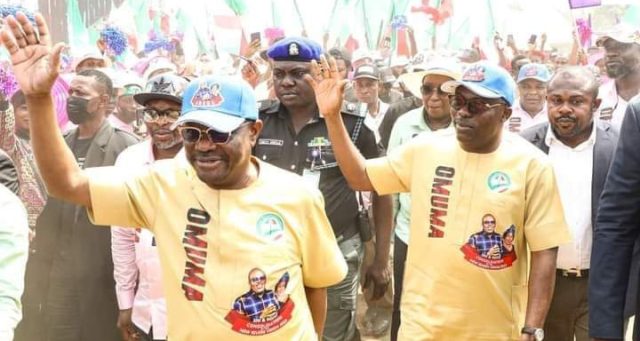 The governor said both the PDP governorship candidate and his deputy are seasoned technocrats with requisite experience about the workings of government, and now have the capability to consolidate on the gains made already while continuing in the same development trajectory.

The Rivers State governor recalled that when he asked Omuma people to vote for him as governor in 2015 and 2019, he made promises that have all been fulfilled in terms of delivering of development projects to the area.

In that same vein, Governor Wike said he has come back to ask for electoral support from them for Fubara  because such support will secure more infrastructural development for them.

Governor Wike noted that this is the first time, Rivers State will be blessed with two technocrats who have such wealth of experience, now ready to steer the affairs of the State.

The governor said, so many people have started to come to them with promises thinking that Rivers people have forgotten how they shared money meant for development when they had the opportunity to preside over the State affairs.

Governor Wike named Tonye Cole, the Rivers All Progressives Congress, (APC) governorship candidate and his principal, Chibuike Amaechi, the former governor of the State as the accomplice and have been charged to court.

“The money that should have been used to develop Omuma and some other local governments of Rivers State was siphoned by Tonye Cole and his master. That’s is why we have charged them to court because we will not allow anybody who stole our money to come to power through backdoor.”

The governor insisted that the likes of such persons can not be allowed to preside over the State because Rivers people will deliver votes to those who have promised, fulfilled such promises and delivered projects.

Governor Wike also announced the award of the Eberi-Umuakali Road project and assured that it will be completed.

According to Governor Wike, the trend of infrastructural development will continue under the leadership of  Fubara after the  March 11 governorship election.

He noted, despite his administration being critical against the federal government, they still adjudged him as the best in infrastructure delivery.

Governor Wike told Omuma people that Rivers State cannot be intimidate, no matter the gang up and urged them to stand firm, while supporting the bid to protect the State.

“Nobody should be afraid of whatever is going on in the country. We cannot be intimidated. Nobody can take away this flag away from us. We are not second class citizen to anybody and we must continue to stand firm and make sure our state is protected.”

The governor also urged then to go and collect their Permanent Voters Cards (PVCs) because it is their power to resist those who failed in their vain attempt to use the military and the police to rig the 2019 general elections.

“Our power is our PVC. We will use it well on the 25 February and 11th  March. Let me tell you, this election will not be like 2019 when they used soldiers and used police. It will not happen again.”

In his speech, Rivers PDP governorship candidate Sir. Siminialayi Fubara, charged Omuma people to gear up to secure what the party has already offered by using their votes to make bold statement of support for the consolidation team.

Fubara said his focus, when elected, will be to build and develop human capacity that will be equipped to drive the overall development in the area.

According to him, loudness is not strength, but being able to know what to do and be concerted in delivering the core mandate.

Director General of the Peoples Democratic Party (PDP) Campaign Council,  Felix Obuah thanked Omuma people for their resolve to deliver 100 per cent votes that will secure electoral victory for the consolidation team of the party at the poll.

Rivers State Chairman of PDP, Ambassador Desmond Akawor,  who presented party flags to the candidates vying for the various elective positions in the next general election, acknowledged the massive show of solidarity of Omuma people.

Chief Allwell  Onyesoh, the PDP candidate for Rivers East Senatorial district election spoke on behalf of the candidates, and thanked Omuma people for the confidence reposed in them, and assured they will not disappoint the people.

Hon. Kelechi Nwogu, who the PDP candidate for Etche/Omuma federal constituency, described the event as a victory rally, said Omuma people have remained faithful supporters of PDP and are determined to deliver winning votes for all the candidates.

Those Plotting To Deal With Me, God Won’t Let You Win Presidency – Gov. Wike