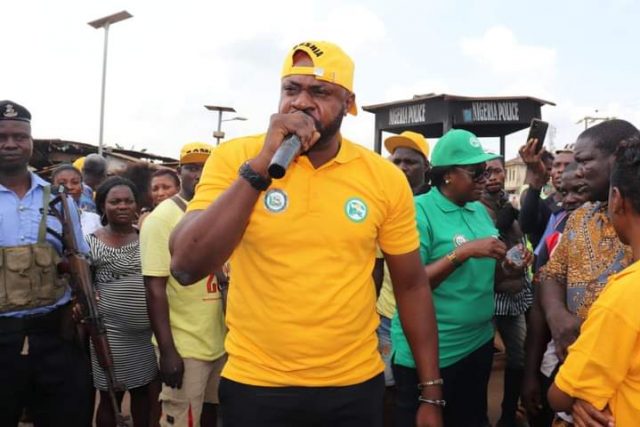 Adekola gave this remark during a sensitization tour of markets, motor parks, and other strategic locations in the Remo axis of the State in the company of the Commissioner for Health, Dr. Tomi Coker, Special Adviser to the Governor on Health, Dr. Tayo Lawal, Permanent Secretary in the Ministry, Dr. Kayode Oladehinde, Executive Secretary of the Ogun State Health Insurance Agency (OGSHIA) and other top officials of the Health Sector.

He said the scheme, if embraced by all residents, would save anyone who develops a serious medical condition from having to pay out-of-pocket for treatment, adding that the insurance programme also catered for screening for common diseases that could lead to untimely death.

“Healthcare is a necessity but can be expensive at times.  You only need to commit a monthly fee of N1,000 per person or N4,000 for a family of six to access comprehensive healthcare anywhere in Ogun State”,

“Our governor has given us security against sudden illnesses and diseases with this programme. For me, this is his best gift for all of us. Like it is being done in developed country outside Nigeria, you only have to commit a token as insurance,” he said.

The Commissioner for Health, Dr. Tomi Coker, while fielding questions from newsmen, said the Health Insurance Scheme is the State’s gateway to providing universal health coverage.

Coker said the Health Insurance Scheme includes the Basic Healthcare Provision Funds (BHCPF) for the vulnerable including children under five years, pregnant women, people above 60 years, and those with disabilities, saying more than 50, 000 beneficiaries across the three senatorial districts have been enlisted to access healthcare for free.

“The Scheme also caters for the informal sector which includes artisans, traders, and unions, and the formal sector including bankers, civil servants, and employees of private business entities. There is also an arrangement for students which allows them to access healthcare and give their parents rest of mind”

“His Excellency, Prince Dapo Abiodun has been renovating, equipping, and staffing the health centers across the state because they are the access points. This is to ensure that when the insured go to these facilities, they have people to attend to them and get quality drugs in a conducive environment.

The Commissioner enjoined residents in all areas of the state to take advantage of the scheme, saying the government will continue to engage all stakeholders in order to achieve universal health coverage in the near future.