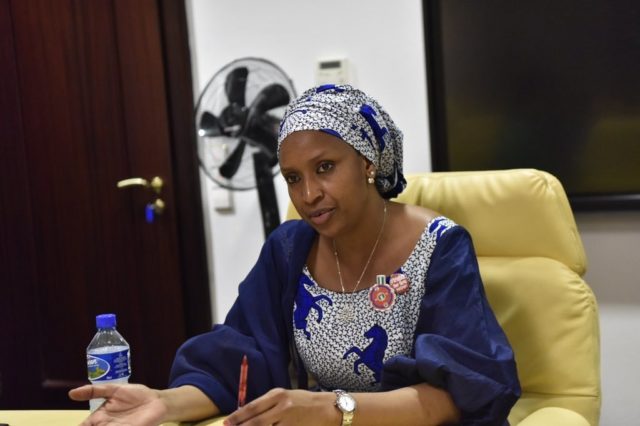 Beyond the allegation of failure to remit revenue to the federation account lies issues of gross insubordination and flagrant disregard for terms of agreement entered into with clients against the suspended Managing Director  of the Nigerian Ports Authority, Ms Hadiza Bala-Usman.

For the suspended Managing Director of the Nigerian Ports Authority, Ms Hadiza Bala-Usman, it doesn’t rain…it pours. Since the announcement of her suspension by President Muhammadu Buhari  various allegations have surfaced against her, giving indications as to why she may have been suspended.

Fresh reasons emerging on the Hadiza suspension centers on gross insubordination to superior government officials. For instance, in June 2020, President Buhari waded into the land lease agreement dispute between the NPA and Lagos Deep Offshore Logistics Base (LADOL). The NPA, under Bala-Usman’s watch, had terminated the  25-year lease agreement the between the NPA and LADOL.

On this matter, President Buhari had directed the Bala-Usman-led NPA to comply with the federal government’s approval of a 25-year lease agreement with LADOL, meaning the land agreement be restored.

This Presidential order, which was disobeyed by the suspended NPA MD, was conveyed in a letter the Attorney-General of the Federation and Minister of Justice, Abubakar Malami (SAN), sent to the NPA, via a letter dated June 3rd, 2020, titled: “Re: Brief on the LADOL Free Zone Disputes and the Need for the Federal Government to Intervene Urgently.”

The letter, addressed to government agencies read: “I wish to refer to a letter Ref No. PRES/97/HAGF/93 dated 27th May, 2020 from the State House, Abuja and to convey Mr. President’s directive as follows: “That NPA complies with Mr. President’s subsisting approval for 25 years lease covering 114,552 hectares granted to Messrs. Global Resources Management Limited (GRML) in 2018.

“That all relevant agencies comply with the legal opinion attached hereto which is geared  towards resolving the dispute, restoring investor confidence to the industry and bringing NPA’s actions in conformity with the extant laws and federal government’s policy on local content. Accept the assurance of my warm regards, please.”

While Bala-Usman traversed the maritime landscape it elegance, with a firm determination to excel, yet, her many battles with stakeholders in the sector remains a sore point in her administration. One example is her battle with LADOL for allegedly violating the terms of the land lease at Tarkwa Bay, near Light House Beach in Lagos, leading to the revocation of the lease agreement with the firm via a letter dated November 14, 2019 and addressed to the Managing Director of Global Resources Management Limited (GRML), the parent company of LADOL. The letter was signed by NPA’s General Manager in charge of Land and Asset Administration, Mr. Yusuf Ahmed.

ALSO READ  Port Health Sends SoS To FG, Says "We Trek From Berth 1 To Berth 14 Discharging Our Duties Aboard Ships"

Another rather very contentious issue Bala-Usman had was her violation of an agreement with a stakeholder in the sector: the decommissioning of the BUA Ports Terminals Port Harcourt, Rivers state.

While the suspended MD of the NPA caused a “Notice of Termination” to be issued to BUA, interestingly, the NPA failed to abide with the provisions of the Lease Agreement, especially the dispute resolution provisions. The  Agreement provides that certain steps must be taken where there is a dispute which if cannot be resolved amicably, then the matter should be referred to arbitration.

BUA, in the process, had revealed that the NPA actually failed to carry out any of its own obligations under the Agreement, which obligations are necessary and required for a concomitant obligation by for any meaningful reconstruction. For instance, under the agreement, the NPA has the specific obligation to dredge the ports, repair, renew, rebuild the quay walls and provide security for the terminals. It did not do any of these.

A high ranking source in BUA revealed that it was the failure of the NPA to provide the required security that led to the nefarious activities of hoodlums and vandals who over a period of time cut the pipes and steel beams of the berths thereby affecting their stability and consequently making remedial works imperative.

“As a matter of fact, within three months of Ms. Bala Usman assuming office, she went to Port Harcourt and in her haste to stop BUA, the Hadiza Bala Usman led NPA immediately terminated the contract without any recourse to the provisions of the lease agreement, which does not grant her or the NPA such powers. As a responsible corporate citizen, which appreciates the coercive powers of the NPA as an agency of Government, BUA approached the Federal High Court for the protection of its rights and investments. The court dutifully granted an injunction restraining the NPA from giving effect to the Notice of Termination and also ordered parties to proceed to arbitration in accordance with the terms of the Agreement.  In essence, NPA was enjoined to await the outcome of the arbitration proceedings,” BUA said in a public statement.

BUA further alleged that the NPA and its MD, upon realising their grave error, initiated arbitration proceedings as stipulated in the lease agreement. However, while the arbitration process is still ongoing, the Hadiza Bala Usman led NPA has once again disregarded the entire judicial process and went ahead to decommission the terminal allegedly based on the contents of a letter we wrote to the NPA seeking to perform remedial works  on some parts of the terminal that were vandalised.

For over a decade, INTELs Nigeria operated some berths at the Federal Ocean Terminal (FOT) of the complex, providing logistics services until 2020. The three berths of FOT numbered 9, 10 and were taken over by the NPA in a controversial manner.

The NPA, in September 2020, issued a notice, announcing that the service operation handled by the Integrated Logistics Services (Intels) Nigeria had been terminated. It went on to further state that all Service Boats Owners and Operators are to do transactions directly in each of the Port Complex of the Nigerian Ports Authority.

However, a memo obtained by The Nation, revealed that the NPA had transferred the berths taken from INTELs to ICTSI, five months earlier. The memo, dated May 13, 202, with reference number HQ/AGM/L&E/M39/151, titled “Forwarding of Draft Lease Agreement” and signed by Yusuf Ahmed, NPA’s Director of Lands & Asset Admin on behalf Usman, read inter alia: “Please refer to the lease of land and berths 9, 10 and 11 granted to you at FOT Onne and find attached herewith the draft Lease Agreement for a review of its possible contents before the final copy is produced for execution. Please send us those comments for consideration. A registered surveyor will be appointed to produce the survey plan of the property for incorporation in the Lease agreement and you will be required to settle the surveyor’s fees. We await your response to enable us to conclude the processes please,” the letter addressed to the managing director of ICTSI read.

Investigations reveal that Hadiza desperately made sure her staff, Legal Dept the GM lands went to the office on weekends during the covid lockdown just to make sure that the agreement between NPA and ICTS was ready for signing.

She had asked the  Executive Director in charge of Engineering to ‘urgently’ advice on an application for lease of berths 9-11 and adjoining lands and facilities.

She hurriedly approved the allocation on 30th March and letter of award issued to ICTS on same 30th March.

This is inspite of is a committee recommendation that NPA allow intels to pay for the berths, which they (Intels) did pay.

The failure of Bala-Usman’s NPA to follow dispute resolution options as enshrined in agreements it reached with partners has done the Authority more harm than good. For instance, the agency has been enmeshed in avoidable litigations which may not end in government favour and also incurring costs. It has also taken its toll on investors’ confidence.

For instance, the huge investment of over $214m of BUA is now in danger. Her acts of Insubordination and refusal to follow laid down rules on matters of agreements was believed to be causing avoidable litigations and threatening investors confidence in the maritime industry.

Dr Magdalene Ajani, Permanent Secretary of the Ministry of Transportation who stated this in reaction to an earlier media report, said the Minister,  Rotimi Amaechi, had directed the stoppage of the deals involving the Lagos, Bonny/ Port Harcourt channel management.

According to her, the minister had directed that NPA should acquire the necessary machineries and undertake the job in house rather than paying such humongous sums to dredging contractors.

According to Ajani, Channel Management’ contracts have been routinely awarded over the years by the NPA at a cost of between N50 and N60 billion on an annual basis.

“Pursuant to the above directive, the Ministry’s Maritime Services Department vide a letter No. T0160/S.30/T4E/T2/61 dated February 2, 2021, to the Managing Director, NPA titled: “Request for information on the expired contracts: Channel Management and Managing agent contracts”. The letter, inter alia, requested the NPA to provide the following information for the Ministry’s records and further necessary action: ‘The current status of the Managing Agent contract and the measures put in place to cover the vacuum created as a result of expiration of the contract to prevent revenue loss to the government:

“The current status of the Lagos and Bonny/Port Harcourt Channel management Companies and the measures put in place to cover the gap created by the expired contracts to ensure the channels are maintained for safe navigation and efficient service delivery; “The volume dredged annually from the channels and the depths achieved from inception management contracts to date and the amount expended: “The number of wrecks removed annually by the Channel Management Companies from inception of the contracts and amount spent; and “The total number of buoys replaced or maintained during the life span of the contract and the amount spent.

IGWEBUIKISM: Appraising The Contribution Of Prof. Kanu Ikechukwu Anthony,Osa, Within The Ecology Of African Philosophy

Dr. Jamoh One Year In Office As DG NIMASA, A Case Of Chasing Shadows In The Dark