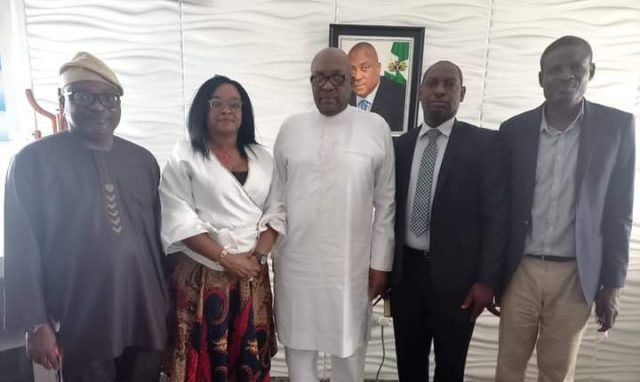 The Nigerian Port Authority (NPA), in partnership with the Apapa Residents Association (ARA), has concluded plans to refurbish the Lagos Water Corporation 2.5 Million Gallons per Day (2.5MGD) Apapa Mini Waterworks as part of its Corporate Social Responsibilities (CSR) in Apapa area of the State.

The Chairman, Apapa Local Government Area, Mrs. Idowu Sebanjo disclosed this during her courtesy visit to the office of the Managing Director, Lagos Water Corporation, Engr. Adekunle Badmus at the LWC Headquarters, Water-House, Ijora, Lagos, soliciting the supervisory support and assistance of the Corporation for the successful completion of the project expected to commence soon.

She stated that the project, on completion, would be of great benefit to the Apapa Community, adding that it is her hope that the residents of the area would celebrate the Christmas season with clean potable water running in their homes.

Responding, the LWC Managing Director/CEO, Engr. Muminu Adekunle Badmus assured the Chairman of the Corporation’s readiness to support and ensure the successful completion of the project.

He, however, requested for the project assessments to know its contents/detailed information, level of damage and reticulation among others, adding that LWC is ready to work with Apapa Residents Association Committee, the Project Contractor and the Consultant.

Upon completion of the project, according to Engr. Badmus, the attention would be drawn to the reticulation, in order to connect more residents, assuring that the Corporation will work out a reasonable and favourable water tariff for the consumers in the area.

The Managing Director also revealed that the Lagos State Government is currently rehabilitating major waterworks at Ishasi, Iju and Adiyan, stressing that Governor Babajide Olusola Sanwo-Olu Administration is committed to improving the water supply in the State.