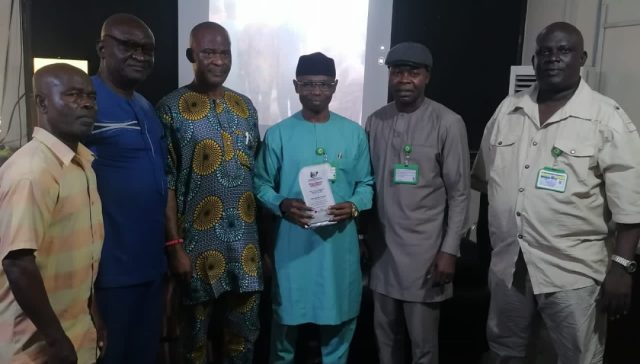 Mallam Kaumi Buka , Port Security Officer (PSO), Lagos Ports Complex (LPC) of the Nigerian Ports Authority (NPA) has been honoured with a diamond award as the most outstanding officer for 2022.

The award  presented to the port official  by top executives of Save Nigeria Freight Forwarders Importers Exporters Coalition on Thursday in Lagos, was  aimed to commemorate his  dedication and exemplary service in human and management relationship which primarily surrounds port security development.

While presenting  the award to the recipient, the National Coordinator of the group,Chief Dr Osita Patrick Chukwu, said: “Your kind gestures and that of your officers toward the stakeholders at Lagos port s greatly speaks volume”, adding that his operational style was appreciated by port users of LPC.

Osita described the recipient as someone  endowed with robust human relationship and full of humility,  thus  willing to listen to issues arising from bottleneck and security challenges at the port.

He maintained that gridlock along the port corridors have disappeared since his appointments as PSO of LPC, noting that Buka wealth of experience will snowball him to bigger responsibilities of the NPA in the future ,adding that no reported case of money exchanging hands with port users have been confirmed about the current PSO.

As activist group in port operations, the National Coordinator also disclosed that the award is not monetised in anyway adding that the recipient duly deserved the honour to further encourage him do more to promote port efficiency .

He said NPA security personnel and the Port Police Commissioner Western ports have done much in the area of security within the port complex and the corridors, saying that cargo movement in and out  of the port terminals have been seamless in the two years.

He further urged management of the NPA , led by Mohammed Koko Bello to further provide logistics for security personnel  to enhance port patrol on 24hours basis.