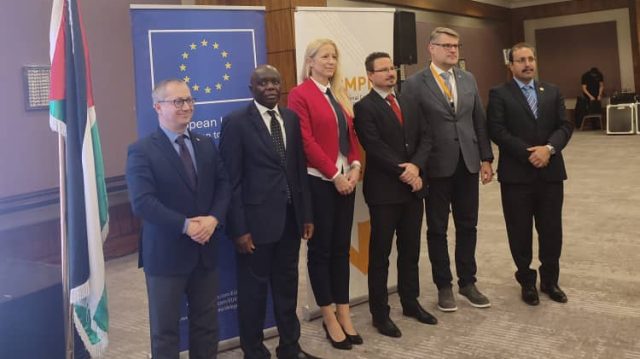 The International Centre for Migration Policy and Development (ICMPD) has gathered Border Security and Migration Management Experts to a two-Day Conference in Amman, the capital city of the Hashemite Kingdom of Jordan on 23-24th November, 2022.
According to a statement on Monday , 28th November 2022, e-signed by Mathias  Esene, Project Manager, ICMPD, West Africa, Abuja office , the meeting which is the 5th International Border Management Conference for 2022 had 150 Border Security and Migration Management Experts drawn from 26 Countries across the globe.
Declaring the event, the Minister of Interior of the Hashemite Kingdom of Jordan, His Excellency, Mazin Abdellah Al Farrayeh, commended the ICMPD for choosing the Hashemite Kingdom as venue for the Conference stressing that his country maintains huge expanse of Borderlines with its neighbours making it a beautiful location for any worthwhile conversations on contemporary Border Security and Migration Management matters.
He affirmed the Kingdom’s unwavering support for the success of the Conference and assured participants of uncommon hospitality of the good people of the Hashemite Kingdom throughout their stay.
4. In his remark at the event, the ICMPD Director, Migration Dialogues and Cooperation, Mr. Martijn Pluim, noted that there was no better time than now to organize a Conference of this nature involving renowned Border Security Experts across the world to compare notes and share experiences on the unfolding Border Security and Migratory realities.
He noted that contemporary migratory and Border Security developments are fastly demanding that only coordinated efforts by governments and Border Officials would guarantee safe, humane and orderly migration.
Other notable personalities including the Ambassador of the EU delegation to the Hashemite Kingdom of Jordan Her Excellency, Maria Hadjitheodosiou, commended ICMPD for keeping faith with conversations on better management of Border Security matters assuring that the EU will continue to support projects and programmes that would sustain coordinated migratory experiences.
Some Delegates from some African countries including Nigeria, Ghana and Tunisia attended the event. The Nigerian Delegation of five Border Security Experts was led by the Deputy Comptroller General of Immigration, DCG Muhammad Aminu Muhammad mni. DCG Aminu represented the Comptroller General Isah Jere Idris at the event.
He was one of the Experts who presented papers during the Conference. While delivering his paper titled ‘Mobility and Challenges of African Borders: A search for a Proactive Border Management System for Effective Global Security’, DCG Aminu gave very insightful accounts of Border Security and Migration Management realities in Africa to the admiration of the participants.
He vividly relayed a scholarly account about how the 1884 scramble and partition of Africa led to the dislocation and displacement of the robust cultural and good neighbourliness among the people stressing that the arbitrary imposition of imaginary Borderlines by the authors of the Berlin Conference has continued to be the source of many avoidable Border disputes in the continent till date.
The Ghanaian and Tunisian delegations also made presentations. It was indeed a great event for the African delegations as it afforded the opportunity for sharing of best practices on effective Border Security and Migration Management.
Earlier, the Nigeria delegation had visited the Nigerian Embassy in Jordan and was warmly received by the Charge de’ Affairs, His Excellency, Ambassador Konfut Umar and his team. The delegation got treated to a very beautiful airport reception and a dinner at the Embassy.
Meanwhile, some of the topics treated during the Conference include ‘The challenging and ever evolving world of border management’: ‘Increasing relevance and benefits of the Integrated Border Management Approach’; ‘ICMPD engagement in global border management dimension’; ‘New Challenges for Border Security in the Cyberspace’; ‘Data Collection and Analysis a driver of modernisation in the field of Border Management’ among others.
In his closing remark, the ICMPD Head of Programme, Border Management and Security, Borut Erzen, called on Experts to continue to see and treat migration issues as shared responsibilities among countries maintaining that current migratory realities are proving that no country can single-handedly address migration and Border Security issues.
He advocated for regular interfaces to develop and demonstrate common language and understanding of global migratory matters. He pledged ICMPD’s continued commitment to global partnerships in addressing Border Security and Migration issues and commended donors for their constant supports.
Some of the countries represented at the Conference include the UK, Pakistan, Iraq, Ukraine, Krygystan, Lebanon, Lithuania, Czech Republic, and Tunisia among others.
ALSO READ  Gov Makinde Constitutes Governing Councils Of Tertiary Institutions, Waste Management Agency