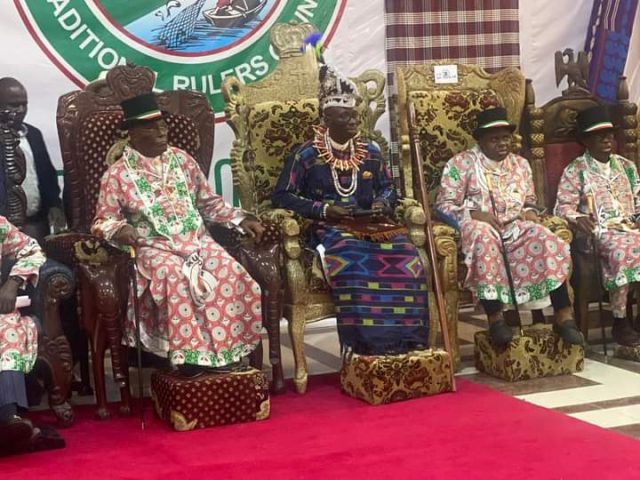 Atiku arrived at about noon and was accompanied by members of the PDP National Working Committee and the Presidential Campaign Council.

Making his brief remark at the Oxbow Lake Pavillion where the rally was held, Gov. Diri said  “PDP is the party that has given us everything from the beginning of civilian regime till today.

“So I want to on behalf of our great party and the Government of Prosperity of Bayelsa State appreciate our President and Vice President in waiting,” Governor Diri stated.

Alhaji Atiku Abubakar, a former Vice President of Nigeria and People’s Democratic Party (PDP) Presidential candidate for this year’s general election while speaking during a courtesy visit to the  Bayelsa Traditional Rulers Council in Ovom, Yenagoa reiterated the need of restructuring Nigeria

Atiku said :”I am very very angry and annoyed that the East-West road that we continue to pump money every year in the budget remains a mystery.

“One critical issue in which I have made a cardinal principle is the restructuring of Nigeria. Because I so believe in it, I want to see a very very small Federal Government.

“With the time most of the resources to the various components of the State,  you know your problems more than the Federal Government so with more resources and more power you can take care of yourselves. So this is where I stand as far the issue of restructuring is concerned.”

Those Plotting To Deal With Me, God Won’t Let You Win Presidency – Gov. Wike

Rivers State Is Safer With Fubara As My Successor – Gov. Wike