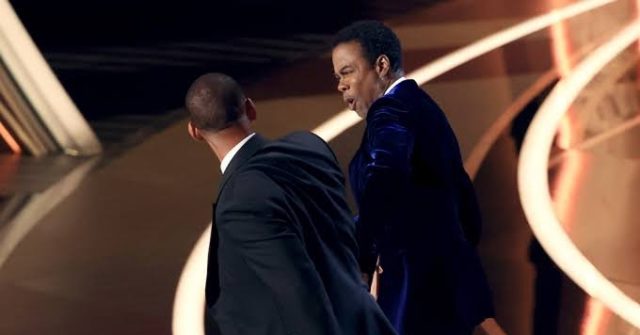 In one of the most shocking moments in Oscars history, Will Smith stormed onstage and slapped presenter Chris Rock for a joke the comedian made about Smith’s wife, Jada Pinkett Smith

The drama began while Rock was presenting best documentary during the 2022 ceremony.

Rock made a crack about Pinkett Smith getting ready to film a sequel to G.I. Jane — an apparent reference to the actress having a shaved head. (Pinkett Smith has been open about her hair loss due to alopecia.)

Smith laughed, though looking a bit uncomfortable. Pinkett Smith rolled her eyes and glared at Rock.

That’s when Smith stood up, stormed onstage and smacked a stunned Rock in the face.

What happened next was censored in the United States but aired elsewhere.

Keep my wife’s name out of your f***ing mouth,” Smith said from the audience following a physical confrontation. Shortly after, he won his first Oscar.

As Smith went back to his seat, Rock marveled, “Wow, wow … Will Smith just smacked the shit out of me.”

“Keep my wife’s name out of your fucking mouth!” Smith roared, again seated in the audience.

“Wow dude, it was a G.I. Jane joke,” Rock said, which prompted Smith to repeat his demand.

Looking visibly shaken, Rock paused for a moment and then told the crowd: “That was a — Greatest night in the history of television” and then continued along with his presenter moment.

During the next commercial break, Smith was pulled aside and comforted by Denzel Washington and Tyler Perry, who motioned for him to brush it off. Smith appeared to wipe tears from his eyes as he sat back down with Pinkett Smith.

The next presenter, Sean Combs, addressed the stunning moment by saying, “I did not know that this year was gonna be the most exciting Oscars ever. OK, Will and Chris, we’re going to solve that like family at the Gold Party. But right now we’re moving on with love — everybody, make some noise!”

And that might have been the end of it. But in another dramatic twist, Smith then won the award for best actor for King Richard — his first Oscars win — and retook the stage.

While the Smith-Rock confrontation initially had many wondering if it was some kind of stunt, any doubts were erased when Smith used his moment onstage to apologize for his actions.

“Richard Williams was a fierce defender of his family,” Smith said. “In this time in my life, in this moment, I am overwhelmed by what God is calling on me to do and be in this world. Making this film, I got to protect Aunjanue Ellis, who is one of the most strongest, most delicate people I’ve ever met. I got to protect Saniyya and Demi, the two actresses who play Venus and Serena. I’m being called on in my life to love people. And to protect people and to be a river to my people.”

… Denzel said to me a few minutes ago, ’At your highest moment, be careful, that’s when the devil comes for you.’ I want to be a vessel for love. I want to say ‘thank you’ to Venus and Serena and the entire Williams family for trusting me with your story. … I want to be an ambassador of that kind of love and care.”

He continued, “I want to apologize to the Academy, I want to apologize to all my fellow nominees. This is a beautiful moment, and I’m not crying for winning an award. It’s not about winning an award for me, it’s about being able to shine a lot on all the people … and the entire cast and crew of King Richard and Venus and Serena and the entire Williams family. Art imitates life. I look like the crazy father, just like they said about Richard Williams! But, love will make you do crazy things.”

In a statement posted to Twitter after the show, the Academy said it “does not condone violence of any form” and stressed that the night is to celebrate the winners who “deserve this moment of recognition from their peers and movie lovers around the world.”

The LAPD confirmed that Rock declined to file a police report about the slapping, saying in a statement, “If the involved party desires a police report at a later date, LAPD will be available to complete an investigative report.”

After the show, producer Will Packer noted on Twitter, “Welp…I said it wouldn’t be boring #Oscars” and co-host Regina Hall, who said she missed the moment while changing backstage, told The Hollywood Reporter, “I guess it’s a memorable Oscars, let’s just say that.”

It wasn’t the first time Rock has made jokes about Pinkett Smith from the Oscars stage. In 2016, Rock was hosting the event and joked, “Jada says she’s not coming. Protesting.

“I’m like, ‘Ain’t she on a TV show?’ Jada boycotting the Oscars is like me boycotting Rihanna’s panties. I wasn’t invited! Oh, that’s not an invitation I would turn down!” Later, Pinkett Smith would say the jokes “come with the territory.”

Then last year, Pinkett Smith shaved her head and went public with the reason. “Now at this point, I can only laugh,” the actress wrote on Instagram. “As y’all know I’ve been struggling with alopecia.

Just all of a sudden, one day … it just showed up like that. Now, this is going to be a little bit more difficult for me to hide. So, I thought I’d just share it so y’all not asking any questions …. Mama’s gonna have to take it down to the scalp so nobody thinks she got brain surgery or something. Me and this alopecia are going to be friends … period.”

And earlier Sunday evening, Smith brushed off a joke about his marriage. Co-host Regina Hall, while doing a bit about being single, invited several men onto the stage — including Bradley Cooper, Simu Liu and Timothée Chalamet — under the guise that they needed to redo their COVID-19 tests, when it became apparent they were men she is interested in dating.

“Will Smith, you’re married, but you’re on the list,” Hall said, then adding, “Looks like Jada approved it!” Smith, however, rejected her invite and nicely waved her away while remaining seated.

Smith signed off his time on the Oscars stage with a laugh: “Hoping the Academy invites me back!”